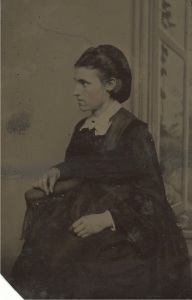 I found a letter from Joan Tighe Clayton, a cousin,  that contained a story about her grandmother, Margaret Noon Tighe. I was able to identify a photo of Joan’s grandmother that was given to my great-grandfather Patrick McTygue about 1870 when he left Rock County Wisconsin to move to Nebraska. My father had the tin-types and didn’t know who they were. I asked if I could take them and try to figure out who they were. I was able to discover who everyone was because I collect family photos and I keep track of all of the families.

Here is the story from a 1996 Christmas letter from Joan –

“ Another highlight of my Irish days was a list to the Famine Museum in Strokestown, County Roscommon. This is the community from which my Grandmother, Margaret Noon Tighe, and her family came at the time of the Great Irish Potato Famine. Many of the Irish families in the farm area around Clinton, Wisconsin (where my father was raised) appear to have their origins in that Strokestown Community during the Famine era. On the wall in the museum was an article from The Freeman’s Journal of April 29, 1848 in which was published a list of tenants from the Pakenham-Mahon estate which now houses the museum. A number of the names on that list are the same as those in the Clinton area I mentioned above. The museum has the best collection of Famine Records and the Museum director was kind enough to give me a copy of The Freeman’s Journal article for my files. President Mary Robinson dedicated the Strokestown Museum in 1884. The 150th Anniversary of the Commencement of the Famine was in 1995 but those who are familiar with the horrors of that time will know that the family lasted for a number of years thereafter.”

Margaret Noon was born in May of 1839 and came to America with her parents. Margaret married Michael Tygue 27 Feb 1859 and they were the parents of eight children. About 1905 the family changed the spelling of their surname from Tygue to Tighe. Margaret Tighe died in Clinton, Rock County Wisconsin 24 Sept 1918.

I do not know if the Clinton Tighe family had/has a copy of her photo. Patrick McTygue moved from Wisconsin to Nebraska about 1870 and the family must have given him the photos when he left.

Look what is happening at Crown Center! The new Irish Shopping Village is being set up today- Saturday! It will be open next Friday at 5 PM! See you there! #kcif2015
This is the 'before' picture is the genealogy area of the @kcirishfest we love our area!
Working on Kansas City Irish Fest 2015!Looking for a few more volunteers who know how to use the computer to search for ancestors! Labor Day weekend.
Loading the Delorean being loaded at #kcirishfest