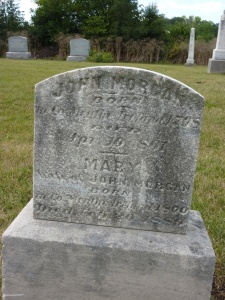 I found a bio of one of William and Rose’s children, ” At the age of nineteen the father came to the United States with his parents and first settled in Albany, New York.  From there he removed to Bloomington and was for many years a member of the police force of that city.  Because of an injury to one hand resulting in the loss of a finger he was not accepted for active service during the Civil war but entered the secret service.  He had two brothers, however, who were in active service.  In 1875 he came to Nebraska and live for one year in Saline county at the termination of which time he came to York county and bought a relinquishment of one hundred and sixty acres on section 34 West Blue township.  Here he engaged in farming until his death in 1894.”

I am taking time this week to see if I can find any more information about this family.  I did make an exciting discovery a couple of years ago.  When I stopped to get the photo of John and Mary’s headstone.  I discovered another headstone of Mary Morgan Hanley.  I discovered that Mary was also a daughter of John and Mary Morgan.  Mary Morgan’s husband was Edward Hanley who was also from Moynalvey County Meath.  I identified Mary in her brother’s obit. It is exciting to find a new branch of the family tree.

A couple of years ago I found out that they don’t have have any records for people who might have worked in the ‘Secret Service’ during the Civil War!

William and Rose Morgan are buried in Exeter Nebraska.

I am a descendant of William and Rose Morgan’s daughter Anna Morgan who married John Neville.

Look what is happening at Crown Center! The new Irish Shopping Village is being set up today- Saturday! It will be open next Friday at 5 PM! See you there! #kcif2015
This is the 'before' picture is the genealogy area of the @kcirishfest we love our area!
Working on Kansas City Irish Fest 2015!Looking for a few more volunteers who know how to use the computer to search for ancestors! Labor Day weekend.
Loading the Delorean being loaded at #kcirishfest

This work by Barbara Scanlon is licensed under a Creative Commons Attribution-NonCommercial-NoDerivatives 4.0 International License.